New Hampshire and North Dakota are the 12th and 13th states respectively to have passed constitutional carry. That means fully one-quarter of the US states now have permitless concealed carry. To see what this means in terms of the percentage of the US population now living in constitutional carry states, Rob Vance has updated the graphic we have presented since 2011. 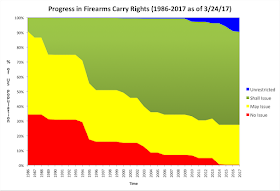 To see how much the world has changed since 2011, see the original post here. I said at the time that shall-issue was the new norm. While shall-issue is still the norm, the number of states adopting constitutional carry may eventually change this statement. I certainly hope so!

Rob had this to say about his statistics in an email he sent me:

Percent of US population living under class of concealed carry law

Note MT is near unrestricted in terms of CCW law

Given the behavior of some counties in CA, 75+% of the US population now lives in shall issue or better territory.

My friend and podcasting colleague Rachel Malone has been fighting for constitutional carry in Texas. She has been working with Rep. Jonathan Strickland on his HB 375. It would bring constitutional carry to the Lone Star State. The good news on this is that it is scheduled for a hearing on March 28th before the House Homeland Security & Public Safety Committee. Moreover, Gov. Greg Abbott (R-TX) has promised to sign constitutional carry if it does pass the Texas Legislature.
John Richardson at 11:53 AM