An example of something banned in Chicago. It is a TZ-75 made in Italy by Tanfoglio and imported by F.I.E. I did replace the original wood grips with Hogue grips. 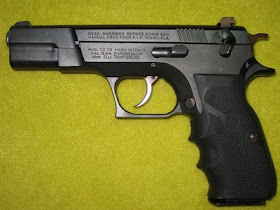 From a description found on the Internet:

Notes: In the early 1980s, the Czech CZ-75 pistol had become a worldwide sensation, and demand for the CZ-75 far outstripped Ceska Zbrojovka’s manufacturing capabilities, or those of any other single firm for that matter. Ceska Zbrojovka therefore began selling licenses to several other European arms manufactures – both Eastern and Western, and also gave most of wide latitude to alter the basic CZ-75 design. Tanfoglio was one of these companies, with their version being called the TZ-75, and produced primarily for export to the US. Early export versions sold in the US by FIE were sold as the "TZ-75," but most of these weapons, imported later by a succession of companies, were sold as the "TA-90" and are designed to appear more like the CZ-75.

The TZ-75 differs from the CZ-75 in several ways. The original TZ-75, in fact, was externally quite different in appearance from the CZ-75, with a sleeker overall shape, a more ergonomic grip, a squared trigger guard, and a larger spur-type hammer. The sights were also of the three-dot type, and larger than those of the CZ-75 (the CZ-75’s tiny sights are one of the few consistent criticisms it has received). The TZ-75 also added a slide-mounted safety/decocker, with ambidextrous controls being an option. The TZ-75 was available in several different finishes; the most common were blued and chromed. Grip plates were of walnut or rubber, and the walnut grips could be had checkered or smooth. The barrel of the TZ-75 is also just a little bit longer than that of the CZ-75’s 4.7-inch barrel – the TZ-75’s barrel length is 4.75-inches. The TZ-75 was later altered to make it look more like an actual CZ-75; though this mostly consisted of restyling, the manual safety was also moved to the frame, deleted the decocking feature, and simply locked the slide, hammer and sear. This later production TZ-75 was designated by Tanfoglio the TZ-75 ’88; for game purposes, it is identical to the TZ-75.

I just shake my head at the stupidity of whomever put the "unsafe" list together as this is a solid, well-made, all steel handgun in 9mm. Jeez!
John Richardson at 9:18 PM