He Looks, He Runs, He Scores

I don't usually brag about finding good deals at stores. This time I have to make an exception with the hope that others might be able to take advantage of it.

The Complementary Spouse and I were cruising one of the local Walmarts last night long after the Black Friday crowds had dispersed. At the end of a gondola in the sporting goods department was a rack of hard-shell gun cases. They were the Plano Gun Guard All Weather 36" gun case. 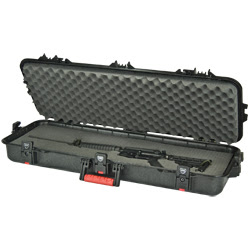 It is similar to the Pelican Storm gun case which I have been lusting after. It probably isn't as well built as the Pelican and doesn't have the in-line wheels but it still looks to be a good sturdy case MidwayUSA will have one of those on sale tomorrow for $149. As it is Amazon has the case I bought for $99 and Cheaper Than Dirt lists it at $109.

The price I paid? $30 each. I bought five of them and I anticipate I'll probably give at least a couple of them as gifts.

I hope others will be as lucky as I was this afternoon!
John Richardson at 2:44 PM