November marked the 18th straight month in which the year over year FBI-run NICS checks increased according to the adjusted statistics provided by the NSSF.  The numbers from NSSF show that 1,101,076 National Instant Criminal Background Check System (NICS) checks were run during the month. This figure is an increase of 16.5 percent over the NSSF-adjusted NICS figure of 945,463 in November 2010. Undoubtedly, this was pushed along by the almost 130,000 checks run on Black Friday, November 25th, alone.

The NSSF research staff has to adjust these figures because a number of states use the NICS checks for concealed carry permit approval purposes and for checking on active CCW permit holders. The states include Kentucky, Iowa, and Utah. 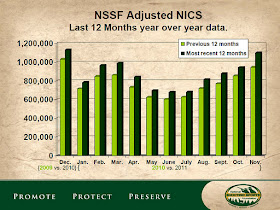 Moreover, this November had the second highest number of NICS checks for the month of November in the last 10 years. Only November 2008 had more. I believe that we can reasonably say that November 2008's sales can be explained by the election of Barack Obama and the feeling that he would seek to implement new gun control measures once in office. He did after all says that we gun owners were bitterly clinging to our guns and religion. 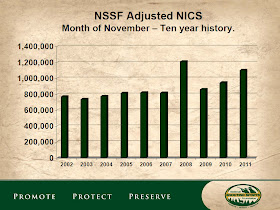 November is also an auspicious month as it marks the 18th anniversary of the signing of the Brady Act on November 30, 1993 by President Clinton. I can't think of a better way to mark the 18th anniversary than to have 18 straight months of year over year increases in NICS checks. It somehow seems fitting.
John Richardson at 9:48 PM