I like attractive women as much as the next guy but sometimes booth babes just are a bit over the top. There were a number scattered around the various exhibits of the NRA Annual Meeting.

Below is a picture of the young lady sitting at the ATI - American Tactical Imports - booth. I don't know who she is or why it was important to feature her at their booth but she seemed a bit more over the top than some of the other booth babes. I'm sure she is a nice person (or at least I hope so) but the ultra low-cut top and funky stockings just don't make it for me. 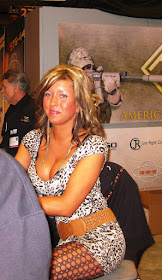 I wish companies would realize that as more women come into the gun community that stuff like this turn will them off. They don't mind seeing attractive women. They just want them to be like a Julie Golob or a Jessie Harrison-Duff - attractive and accomplished shooters. It isn't too much to ask.
John Richardson at 9:55 PM