During our recent trip to the Myrtle Beach area, we took an afternoon excursion to a shooting range in Murrells Inlet. I had planned the trip as part of the "things we did at the beach" this year. I had remembered that there was a range near where we were staying from past trips to the area. Checking with all parts of the family in advance, I got an enthusiastic response from everyone. Thus, in addition to the pool toys and beach hut, we brought with us an assortment of pistols ranging from my Sig P238 to my Daewoo DH-40 with three various 9mm pistols in between. I also dug into my ammo stash so we wouldn't have to buy ammo at the range.

Coastal Sports and Range in Murrells Inlet is a very nice gun store with an excellent, well-lit, 5-bay indoor range. When we got there, store manager Woodie Pitts greeted us warmly, discussed the range rules, inspected all my pistols and ammo, and helped us pick out targets. We also rented a Beretta Neo and a Ruger 22/45 for the new and newer shooters to use. The rangemaster Michael Wiestling went over the operations of both pistols with everyone before we entered the range.


After donning our hearing protection and safety glasses, we went into the range area. It was separated into the five shooting bays and a glassed-in room where the non-shooters could watch. While there were nine of us in the party, only seven had originally planned to shoot. The Complementary Spouse's older daughter Wendy said she didn't feel comfortable shooting but did want to watch. That would change.

While my niece and nephew had shot handguns before, my sister-in-law Cindy had not and wanted to experience it. She strongly believes everyone should have some exposure to gun safety and at least know enough about guns to safely unload one. As you can see below, she went beyond that. Before the range time was over, she had shot both .22's, her sister's M&P, and my Sig P238.

My niece Grace who had shot before likewise got to shoot both .22s and one of the 9mm pistols we brought as did her brother Grant.

While all the afternoon was good, in my opinion the best moment came when Wendy turned to the Complementary Spouse and said, "I think I'd like to try it." And try it she did.


With help from the rangemaster Michael and her Uncle Larry, Wendy not only shot the .22 pistols but tried her hand at shooting the 9mm pistols. Like the former athlete she was, Wendy took instruction well and did great.


Like I said earlier, we arrived with seven shooters and left with eight including two first-time shooters. I think the smile on Laura's face below captures just how much fun we all had. 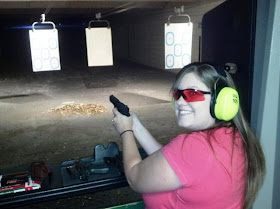 If you are taking a trip to the Myrtle Beach area and want to take in some shooting, I can highly recommend Coastal Sports and Range. They were great and have a really nice gun store to boot.
John Richardson at 8:34 PM