As a "reward" for Sen. Joe Manchin's conversation to the dark side, NYC Mayor Michael Bloomberg will be hosting a fundraiser for him. It is to be held at his home in Manhattan. I presume that means his private home and not Gracey Mansion. The minimum to attend is $1,000. 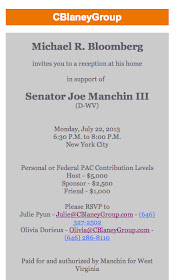 
The fundraiser, scheduled for July 22, marks Bloomberg’s efforts to reward those who supported the gun control campaign and punish those senators who voted against it, including four Democratic senators: Montana’s Max Baucus, Alaska’s Mark Begich, North Dakota’s Heidi Heitkamp, and Arkansas’ Mark Pryor. Last month, the New York City mayor appealed to state donors to cut off contributions to the four lawmakers.

It is no wonder that Beretta scratched the state of West Virginia off the list for possible expansion. I'm sure events like this will play well in the coalfields and factories of West Virginia.

UPDATE: It turns out that Mike Bloomberg not only hates guns but hates coal. Thanks to Sebastian for this link to Bloomberg's commitment of $50 million to close down coal burning power plants.
John Richardson at 9:55 PM