As a follow-up to my post on the closing of the Herculaneum, MO primary lead smelter is this article from Friday's Wall Street Journal regarding an anticipated rise in the price of lead.


Bullish investors are hoping for a repeat of last year's rally, when lead prices soared by 17% between late October and early February.

Some money managers say gains could be even bigger this time amid tighter supplies compared with a year ago. Lead production has been under pressure as more smelters around the world are shut down due to environmental concerns. The International Lead and Zinc Study Group estimates global lead supply will total 11.02 million metric tons in 2013, while demand is pegged at 11 million metric tons. The group predicts supply will fall short of demand in 2014 for the first time since 2009.

"The market looks a lot tighter in terms of balance this year and next year," said Joseph Murphy, a senior analyst who helps manage about $2 billion at Hermes Commodities, a unit of Hermes Fund Managers Ltd. in London. Mr. Murphy's fund had recently added bullish wagers on lead futures.

Lead used in batteries for automobiles and trucks account for 80% of the demand. The estimate that I've seen for ammo is about 3% of the total usage. According to the International Lead Association, 98% of lead used in car batteries in the US will be recycled.

While demand for lead has been increasing, the amount of lead obtained from primary metal production has been level or slightly decreasing since 1970 according to this chart from the International Lead Association. 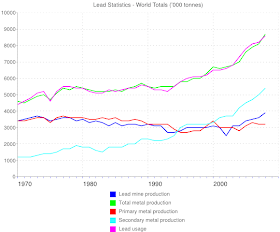 The bottom line is that, with increased demand for lead, ammunition makers will have to pay more for their components to make bullets. One cannot expect the ammo makers to just swallow this cost so we should expect the price of both finished ammo and components to increase.
John Richardson at 8:40 PM