I got an email yesterday from Change.org asking me to sign a petition regarding "Cecil the Lion". The email said 846,000 people had signed the petition which asks for "justice for Cecil". As of a few minutes ago, that had risen to 922,009 signers.

These people need to get a

Trophy hunting, which Cheryl Semcer of Hoboken, NJ blames for the loss of a large part of the African lion population, is not the problem. Indeed, by putting an economic value on these animal, it has done more to preserve lions than anything a ban under the Endangered Species Act would ever do. It is the same with elephants and elephant ivory.

Am I the only person out there who has found the name of the lion - Cecil - somewhat ironic? 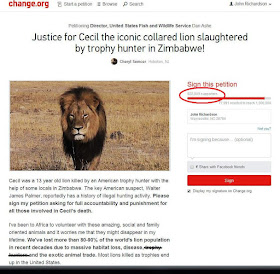