My friend and fellow co-host of the Polite Society Podcast Rachel Malone was fired last month as Operations Manager of the Texas Republican Party. It seems a certain elected official took offense to her criticism of his 40 point "school and firearm safety" proposals especially since it contained a red-flag law proposal. As a result of Gov. Abbott's complaint as conveyed by his henchman, the Texas GOP Chairman was forced to fire Rachel.

If you want to control someone it is much better to keep them under your employ. Firing them allows that person to become a free agent and return to the grass roots firearms activism for which she is known. 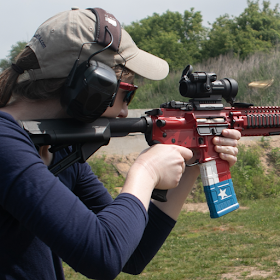 While I've known it since Monday, it is now public that Rachel will be the new Texas Director for Gun Owners of America. In that role, she will lobby the Texas legislature directly on gun rights. I know Rachel's ultimate goal is to bring constitutional carry to Texas.


Springfield, VA – Gun Owners of America (GOA) announces today the hiring of Rachel Malone as Texas Director. This signifies a new focus on GOA’s advocacy within the Texas State Legislature.

Texas is a key state for GOA’s work to advance gun freedoms. Texas is known for its rich heritage of gun owners, and it deserves strong advocacy for gun rights. Knowing this, Gun Owners of America is delighted to establish a permanent presence within Texas to preserve and defend Texans’ right to keep and bear arms.

Erich Pratt, Executive Director for Gun Owners of America, stated: “Texas is facing a battle, and GOA intends to be on the forefront. As the no-compromise gun lobby, GOA looks forward to working with grassroots activists all across Texas for victories in their state.

“I’m thrilled that Rachel Malone is serving as Texas Director for GOA. She has a strong background of fighting for firearms freedom, connecting with grassroots, and advocating within the Texas Legislature. I am confident in her ability to represent Texas gun owners in protecting the essential freedom of the right to keep and bear arms.”

By the way, the picture above of Rachel was from the recent MAG-180 held in Wisconsin where Rachel passed everything with flying colors.

Congrats to Rachel on her new position and kudos to GOA for recognizing the gem that is Rachel in hiring her as the Texas Director.
John Richardson at 6:00 PM