Richard Childress Resigns From NRA Board


NASCAR legend and NRA Board member Richard Childress has resigned from the NRA Board of Directors effective yesterday. He served as First VP until late April of this year. He along with Oliver North were asking the difficult questions about finance and the Brewer law firm. His resignation is the sixth this year if you count Pete Brownell.

His letter below says he needs to fully focus on his businesses which include his race team and a winery in North Carolina. His business acumen and his fund raising abilities will be missed by the NRA. It is my understanding that he is the reason Bass Pro Shops and their Cabelas subsidiary are such large sponsors especially at the Annual Meetings. 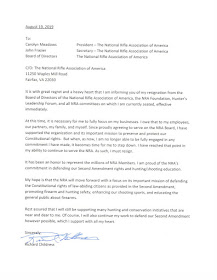