People Ask The Most Embarrassing Questions


Unlike scripted townhalls scheduled for CNN, when it comes to government agencies and social media embarrassing questions do get asked.

A case in point. The Bureau of Alcohol, Tobacco, Firearms, and Explosives maintains a Facebook page. They posted a number of links late last night to the new rules being promulgated as the result of President Obama's Executive Actions. There was one about the elimination of the CLEO signoff and another about Rule 41-P and responsible persons needing background checks. My favorite, however, was their guidance about when a Federal firearms license was needed. Someone named Bre Ve asked a question that you know they would rather ignore. 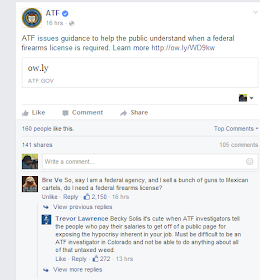 Reading the comments, it appears that a Becky Solis objected to the question. The commenters had good Google-fu and found out that she was none other than an area supervisor in the Denver Field Division. Her comment objecting to Ms. Ve's question has, of course, been deleted.

Good on Bre Ve for asking the question of the day and for the commenters in exposing Ms. Solis.
John Richardson at 4:17 PM